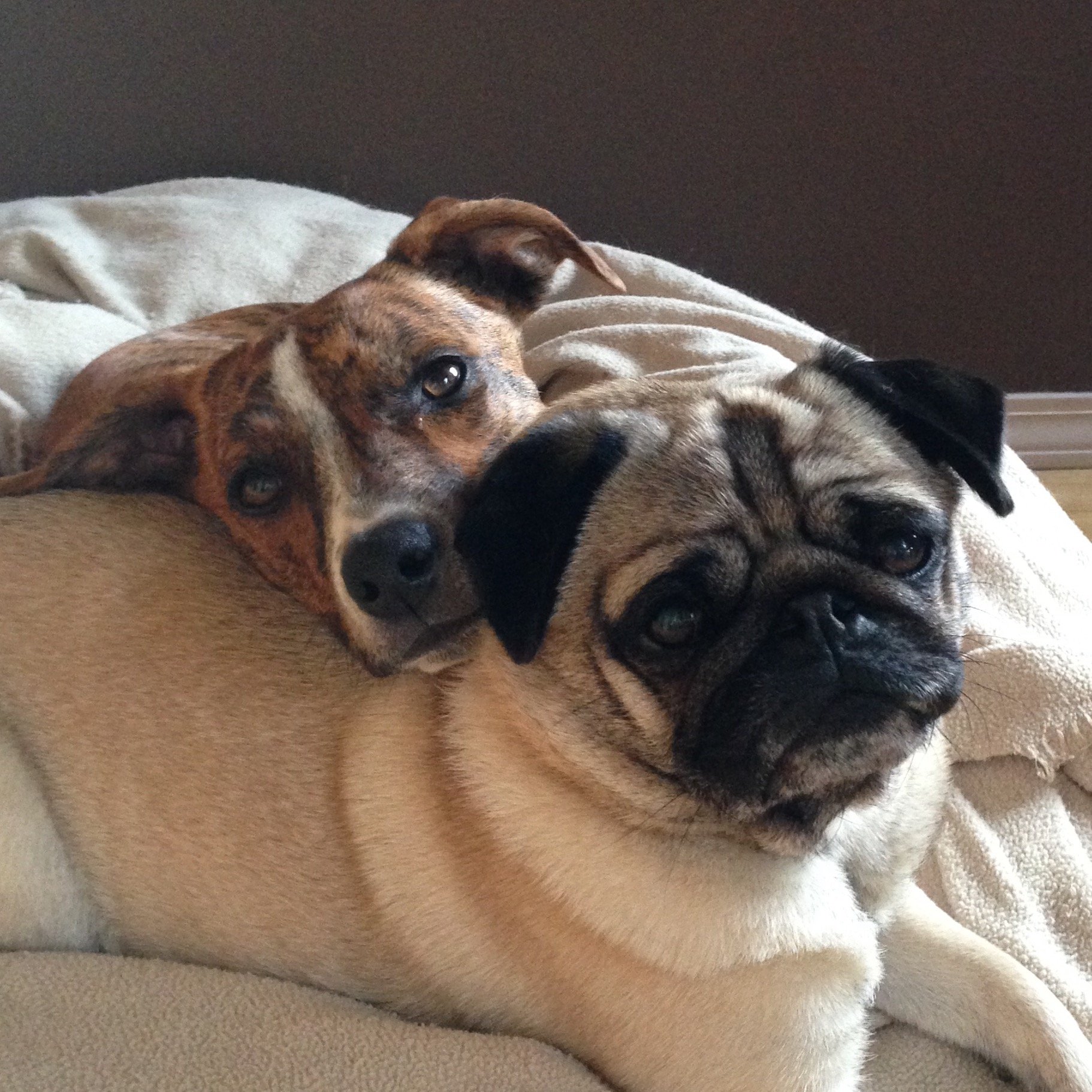 Help! My Dogs are Fighting!

Love at first sight?  Not exactly…

Meet Sydney and Posie, an ongoing success story from two years ago! 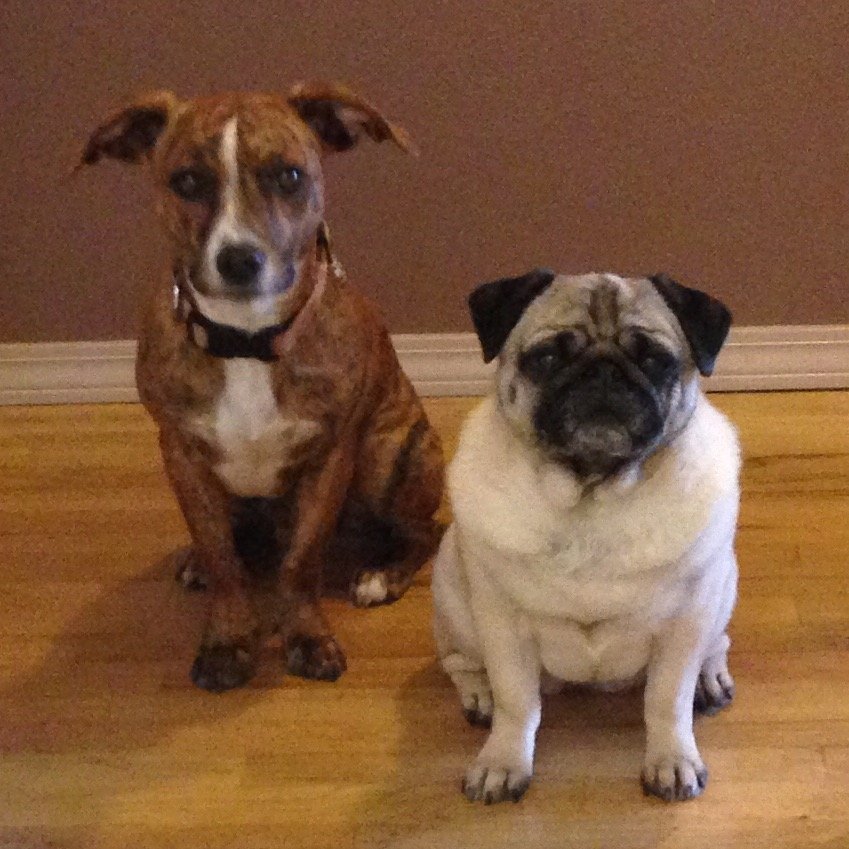 Sydney was a one year old mixed breed rescue dog when I met her, with the description of “1/4 AmStaff, a touch of border collie, and who knows what else”.

Posie was a “sweet and submissive” 6 year old Pug.

My client Anne had brought Sydney into the family with the hope that Sydney and Posie would be fast friends and they would all be one big happy family.

Little did she know, it would be a long road to get there!

Most of us that enjoy having pets will find that there is often some “overlap”. One pet leaves us and at some point we are ready to welcome another one into our lives. Often that means the new pet will be joining an existing pet as well. Sometimes the integration is effortless… sometimes not so much.

Given the nature of my job as a behavior consultant, it is those “not so much” cases that come my way.

Sydney had joined Anne and Posie 7 months before we met. Sydney had been kept with her littermates, but had not had much exposure to the “real” world, so she came with some fear issues. Anne successfully helped Sydney to feel much better in a variety of situations, but then as Sydney got older a new problem raised it’s ugly head.

Things were initially made worse for Sydney by an ear infection. Not only was the discomfort making her ornery, the topical medication she was on contained a steroid that was affecting her behavior. Once the ointment was stopped, things started to get a lot better, but that lull turned out to be temporary.

Even if it seems obvious that a problem is behavioral in nature, it is super important to start with a thorough vet exam. Subtle pain or a latent ear infection or even a budding food or contact allergy can all make for a short fuse and contribute to a behavior issue even if it isn’t the direct cause. Any time there is a change in behavior, your vet should be the first stop!

Although the absence of the ear infection helped, soon Sydney was back to her bullying ways. The attacks would happen suddenly and Anne would have to pry her off of poor Posie. This was causing stress for everyone!

One of the first things we needed to determine was the specifics of what was triggering Sydney’s behavior. She could be perfectly pleasant 90 percent of the time, then BOOM she’d have Posie firmly her jaws.

It was immediately apparent that food was part of the problem. And it didn’t even have to be food that was in front of them. Anne kept the main bag of dog food in the garage and a smaller Tupperware container in the house. In one instance, she had just finished refilling the Tupperware container when Sydney launched onto an unsuspecting Posie. Just the familiar sound of kibble being poured from one container to the other was enough to trigger a reaction in Sydney!

Luckily, Anne had good instincts and even though the fights were very scary, she refrained from overtly punishing Sydney… which would have made things much worse.

When you witness one dog being blatantly “mean” to another dog, it can seem logical to want to punish the dog that is being nasty. We want to send the message that being mean is wrong… right?

If Anne had punished Sydney every time she had a reaction to Posie, she may very well have been able to stop the behavior that was happening in front of her… temporarily. But the bigger picture looks very different. The association that Sydney would likely form is that every time Posie and food were in the same area as her, watch out, because punishment was imminent!

Eventually it could get to the point that just being near Posie would heighten Sydney’s stress and have her on edge. And we all know that when you’re on edge, it’s easier to snap over little things.

A good indication that this unexpected association is happening is an increase in the frequency of the problem!

Since food is the fastest, easiest way to reward behavior and forge good associations, our very first task with Sydney was to help her feel more relaxed around food and Posie. Once we accomplished that, we could more easily use food as a tool for the other parts of our plan.

One common mistake people can make is the inclination to always give food to the worried dog first or the one we think might be “alpha” (this is actually a huge misnomer, but that is the subject for another whole blog article).

We might think we are reassuring the worried dog by letting them have first dibs but it does not teach them anything about how the other guy fits into the equation. Remember, this is all about forming associations and we want the worried dog to make a positive association about the other dog.

So we set up an exercise to teach Sydney that Posie was actually the signal of good things to come.

One for you… and more for me!

We set the dogs up a few feet away from each other. (I always have both dogs on short tethers, especially in the beginning. Safety is key and we don’t want to run the risk of making a mistake that could lead to another attack!) I had Anne reach out in one direction and give Posie a pea sized, super yummy treat – something that could be swallowed quickly without a lot of chewing or crumbs left over.

She then immediately turned to Sydney and reached out with a treat for her, quickly followed with two more treats… one – after – the – other (not just a handful of several) while also telling Sydney what a very good girl she was!

At first Sydney was leaning forward and looking anxious as Posie received her treat. But after several repetitions, the pattern started to sink in. “Ah! When Posie gets a treat I know exactly what is about to happen next! My turn! My turn! Yay!”

And sure enough, as Posie received her treat Sydney started to sit back in happy anticipation of her turn! This was the very first step in establishing an emotional change towards Posie’s presence.

I walked Anne through several additional steps of the food exercises which gradually resembled more “real life” scenarios such as food that might drop on the floor.

Next up… bunk mates… 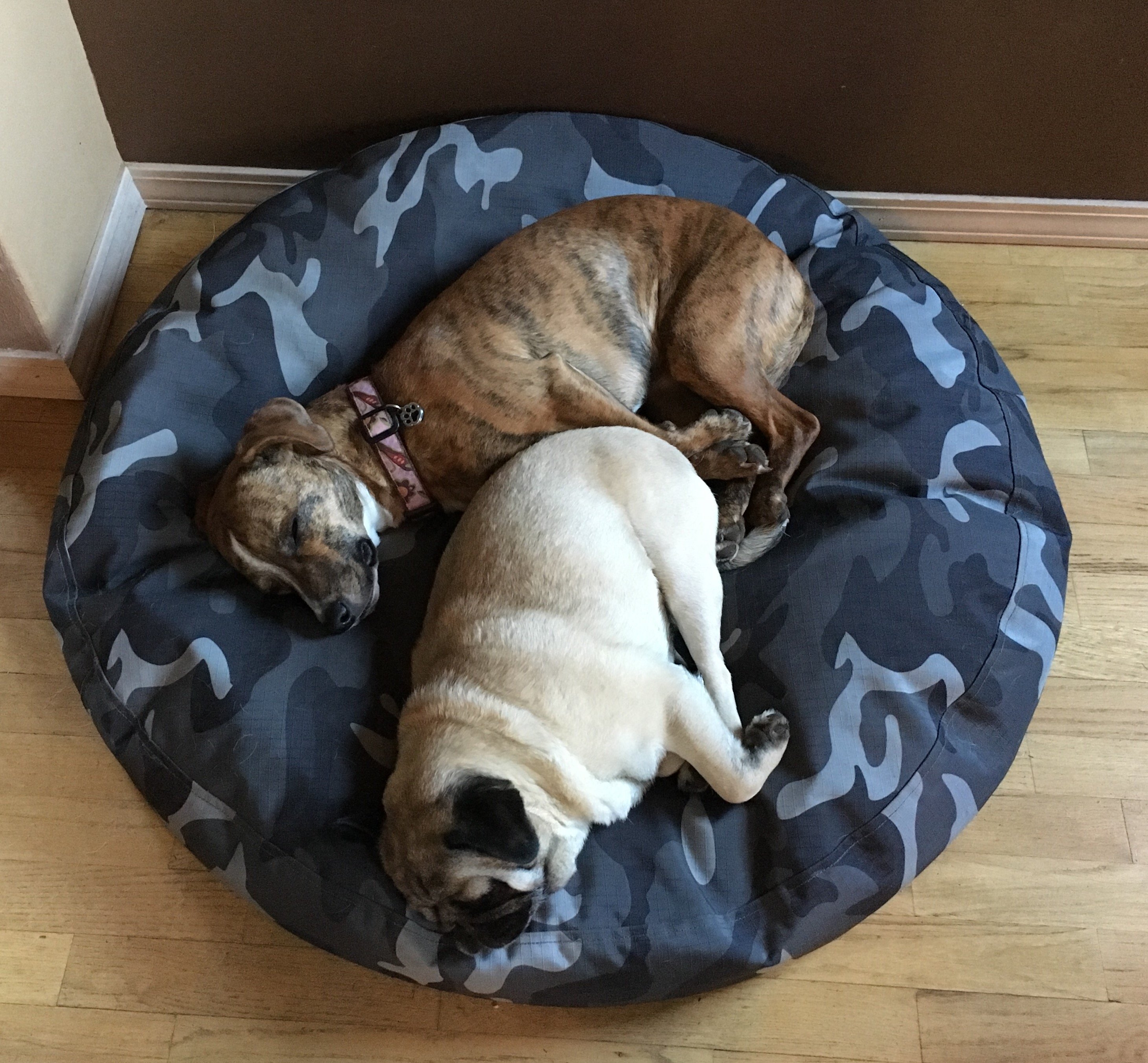 The next challenge to tackle was the dog bed! If Posie was on the dog bed, Sydney had no problem climbing on as well. But if Sydney was there first… woe be to Posie if she tried to join!

We tackled this trigger with the same philosophy, by teaching Sydney that any time Posie approached her and the bed… it meant Sydney’s life was about to get better!

One of the best ways I can help clients achieve success is by having them send me videos of their work with their dog. By seeing their technique and the dog’s body language in response, I can catch mistakes early and help people to know when and how to increase the challenge level for optimal results! Anne was diligent with sending me videos of her work and we were making good progress.

More to the picture…

However, in Sydney’s case, there was more to the picture than just learning new associations. Sydney had a certain amount of underlying anxiety that made it a bit more difficult for her to learn new things very quickly.

An herbalist colleague of mine makes an amazing anti-anxiety herbal blend, so we tried it out on Sydney. Voila! She responded beautifully and our behavior modification sessions went much more smoothly!

…until a few weeks later when it became apparent that Sydney was having an uncharacteristic allergic reaction to one of the ingredients in the herbal blend!  We tried a few different over-the-counter products, but none of them worked quite as well as the herbal blend.

After a conversation with Sydney’s veterinarian, the answer for her turned out to be behavioral medication. It isn’t always the answer, but for her it was the perfect thing to replace the herbs and achieve a similar result.

The important thing to keep in mind with behavioral medication is that it is usually not the drug that is fixing the problem! The drug simply makes it easier for the pet to learn. In Sydney’s case it helped her to be less anxious, so her lessons went much faster and easier!

Two Peas in a Pod… 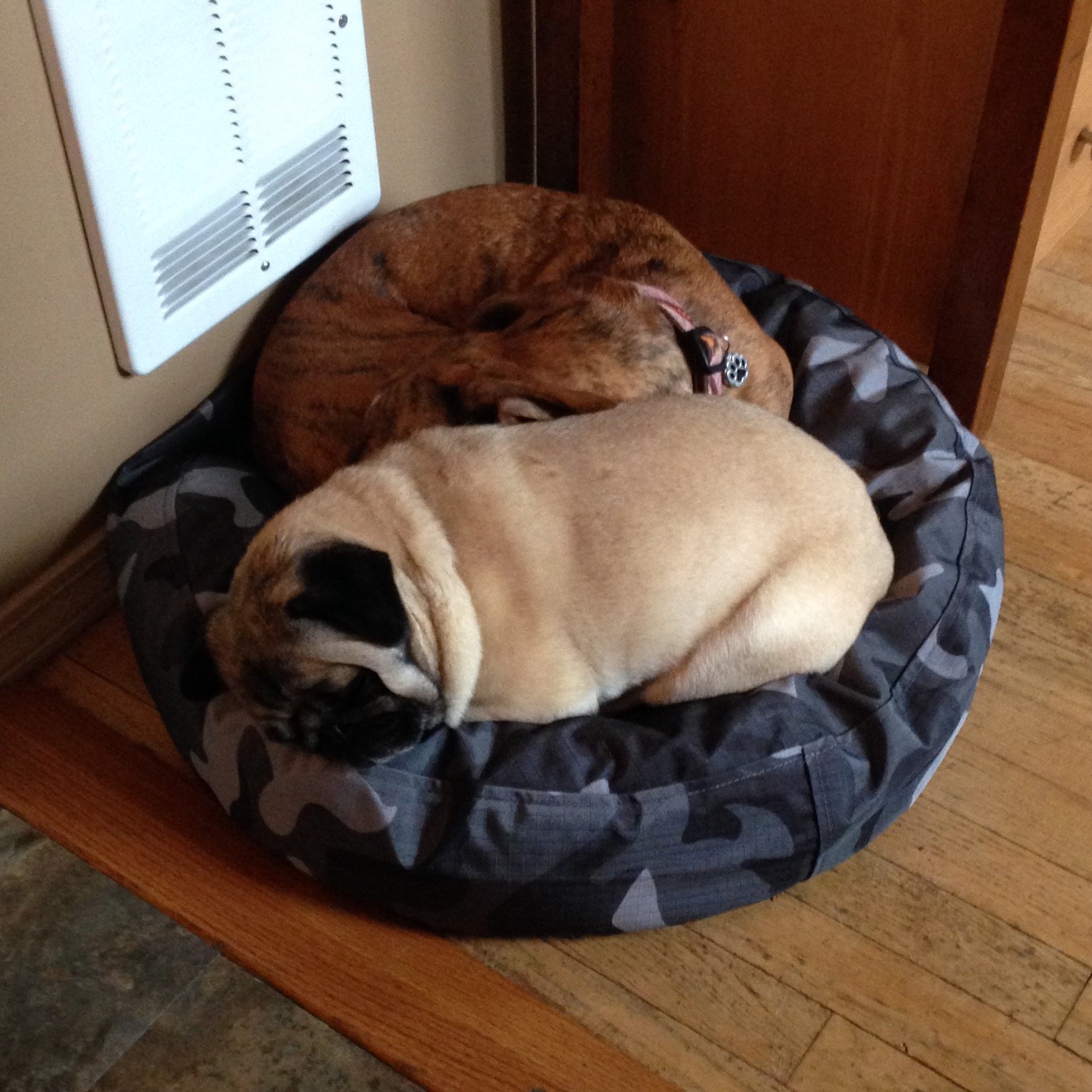 Pretty soon Posie and Sydney could frequently be found curled up together on the same bed. Even though they each had access to their own big dog bed, they preferred to be two peas in a pod…even on the smallest of the beds!

Not only that, but Sydney was learning how to play and have fun! Posie was a very patient teacher and in no time they were playing tag in the back yard or engaged in good natured wrestling all over the house.

Here we are more than two years later and I am still delighted to get the occasional email from Anne with an adorable picture of the two inseparable buddies that Sydney and Posie have become.

Did I mention that I love my job?! 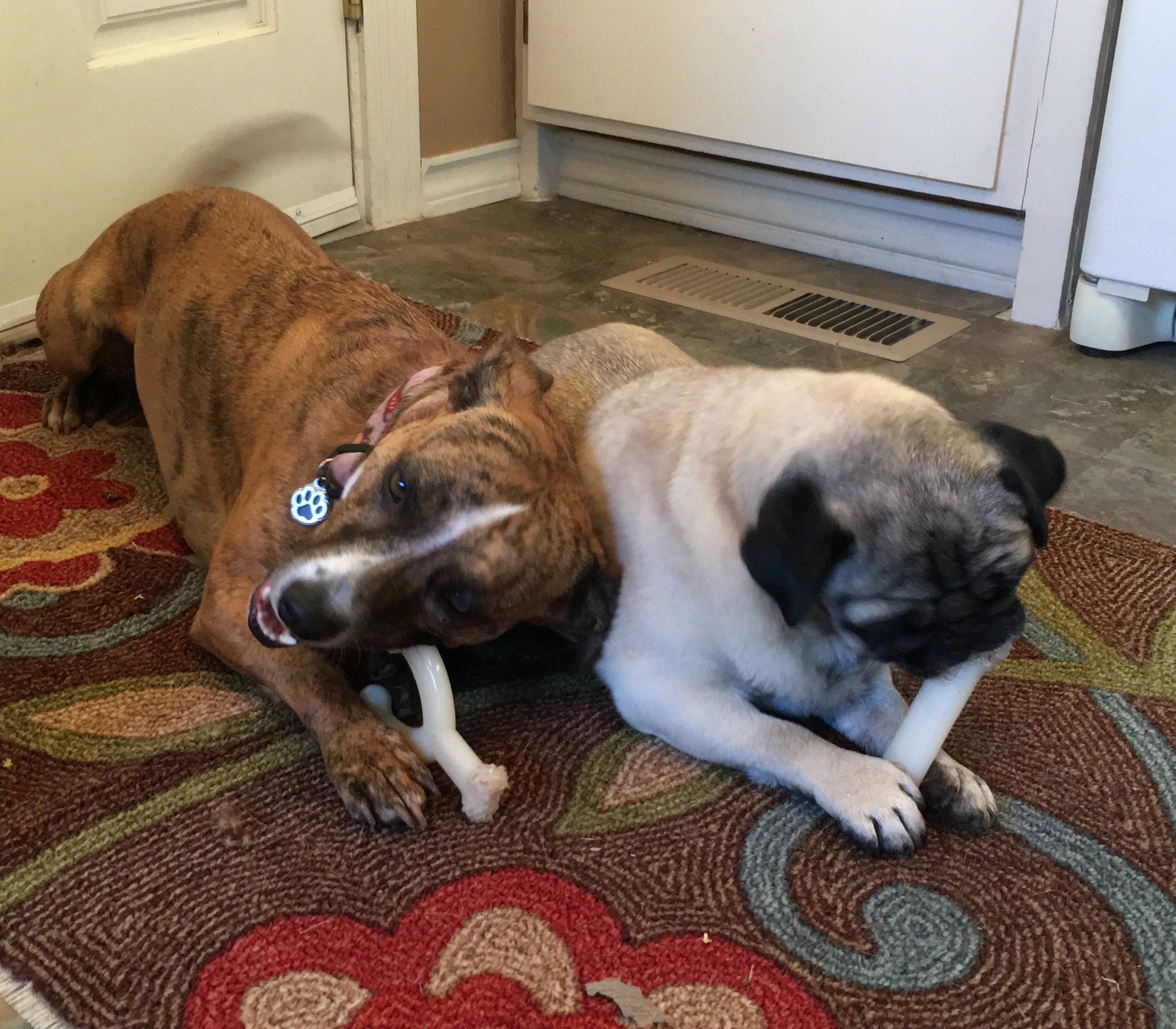 Want to work with Suzi on a pet problem?

Suzi is available for in-home dog or cat behavior consultations through much of King, Pierce, Thurston, and Lewis counties in Washington state.
Suzi also conducts successful video / remote consultations world-wide for a broad range of behavioral issues.
To get more information or to schedule an appointment start by filling out the Services Request Form.
For pricing and options visit the Behavior Services page.

Grab our Instant Fix Booklet — Yours for free!

Suzi is a Licensed Veterinary Technician (LVT), a Certified Professional Dog Trainer (CPDT-KA), and a graduate of the Exotic Animal Training & Management Program at Moorpark College. Suzi is the cat expert on the team and specializes in treating cat behavior problems of all types. Read all about Suzi's wild adventures, from lions and tigers and bears (oh my!) to dogs, cats, and their people.